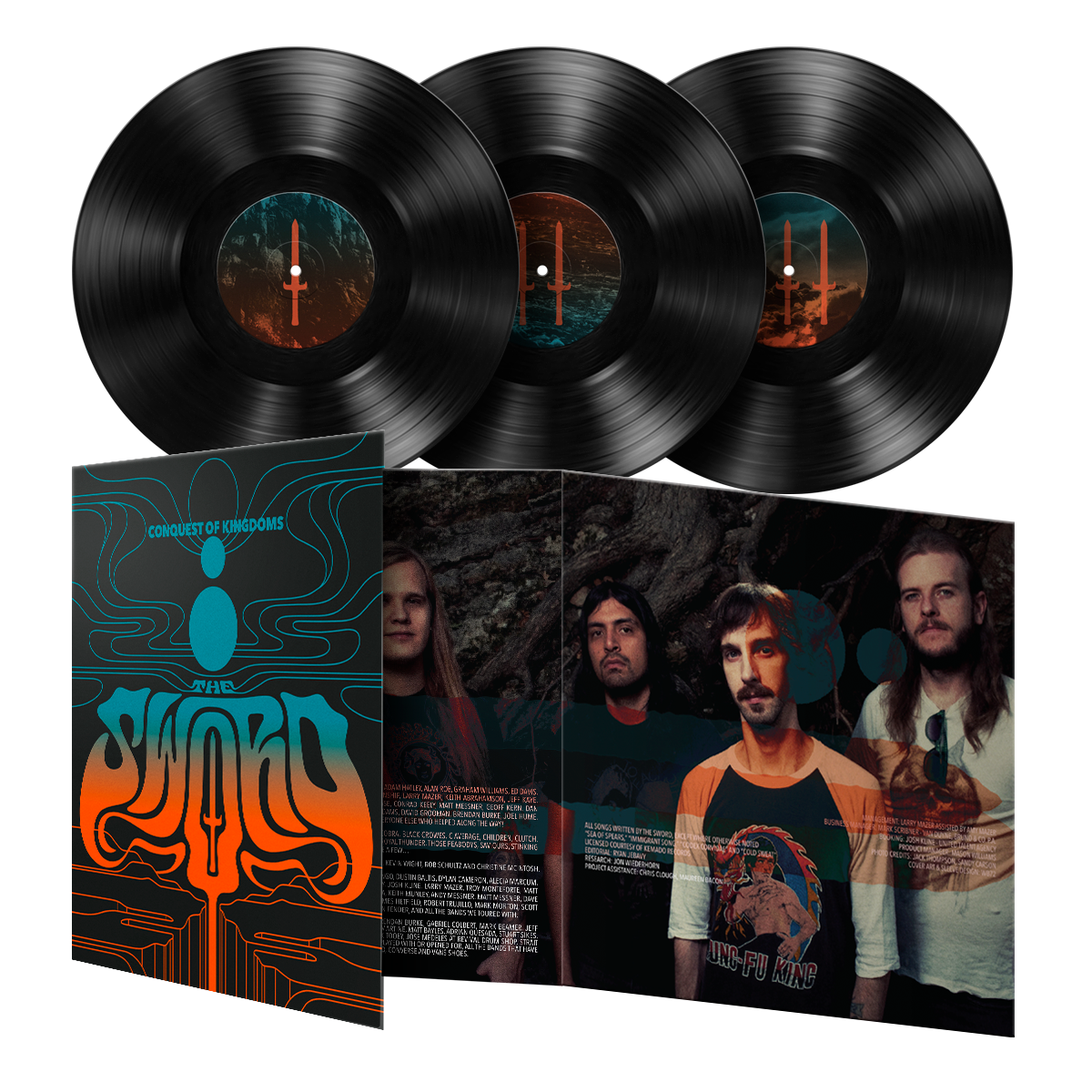 An explosive three-disc collection of career-spanning rarities from retro-metal four-piece, The Sword. 30-tracks (16 previously-unreleased), housed in a triple-gatefold package. Includes B-sides and live recordings of fan favorites including "Freya," "Iron Swan" and "Fire Lances of the Ancient Hyperzephyrians," as well as cover versions of “Immigrant Song” (Led Zeppelin), “Nasty Dogs and Funky Kings” (ZZ Top), “She” (KISS), “Forever My Queen” (Pentagram) and more. It’s been two years since the Austin, TX heavy rockers decided to take a break, but The Sword are unsheathed once more. Two career-spanning collections will be released simultaneously, both showcasing the technically dazzling, riff-heavy and far-reaching metal that the band has been known for since forming 15 years ago.

Conquest of Kingdoms is a three-disc vinyl collection of rarities and oddities (there will be a truncated digital version available), while Chronology 2006–2018 is a three-CD set, which — in addition to the rarities — also includes tracks hand-selected by The Sword from each of the band’s studio albums.

Singer and guitarist John D. Cronise describes the differences between the two formats and the methodology for compiling these: “The CD package will be more of a career retrospective with selections from each of our albums as well as the rarities and B-sides and things. Sort of a mini box set, you could say. The set will include a booklet with essays and photos, to make it special and extra. Whereas the LP release [Conquest of Kingdoms] is more streamlined, with just the B-side and rarities material. Personally for me, that’s what’s exciting about the releases. A lot of that stuff I never thought would see the light of day but I always thought was really cool and was proud of. That’s what I think is exciting about it.”

Bassist Bryan Richie says that it was simply the right time to put these albums out, and to revisit what has been a stellar career thus far. Assembling Chronology 2006–2018 was a no-brainer; the band has an abundance of fan favorite tunes from which to cherry-pick.

“We’ve got all these exclusive 7”s and a split record or two, that were pressed in 1,000 quantities — maybe people heard those tracks on a YouTube stream in not really the greatest quality,” he says. “As the band had gone on hiatus, we had this wealth of material to share including live sets — things that were sitting on my hard drive for years, things that were given to me at shows. It seemed like the right time.”

Some of the oddities included on both Chronology and Conquest include various covers, such as The Sword’s take on the KISS classic “She” and Pentagram’s “Forever My Queen,” previously only heard live.

“Nobody was asking us to contribute tracks for tribute albums, and we didn’t want to put cover songs on our studio albums — it didn’t seem natural for us to do that,” says Cronise. “But at the same time, we’ve always covered a lot of stuff live because it’s fun and the audience likes it. I think our fans will dig that they can now hear those versions.”

The process of putting the two collections together offered the band members (completed by guitarist Kyle Shutt and drummer Santiago “Jimmy” Vela III  — Trivett Wingo was the original drummer) the chance to evaluate their work up to this point, and assess their organic evolution.

“We were conscious of that when it happened,” says Cronise. “Especially getting into the middle portion of our catalog. We were very aware at the time when we were doing something that sounded different from what we had done before. But listening to it all together, the thing that a lot of people don’t mention is what a drastic difference changing drummers made. It’s really such a huge thing. They’re both awesome drummers but very different and it had a huge effect on our overall sound.”

Richie believes that the band became more focused as they progressed, allowing the songs to breathe: “Later, we explored the idea of the song to its fullest within the song, rather than a bunch of different versions of the same song within the song. You work through a time where you do that. You jam everything in, trying to make it as visceral as you can. It’s only natural that at some point you scale that back. Have a more omnipresent, reflective view of what you’ve done and what you’re hoping to do.”

At the time of writing, the music world has effectively been placed on pause due to the global pandemic. Just prior to that, The Sword had accepted a tour with Primus on their Farewell to Kings tour performing Rush material. Hopefully, that tour will still happen later in the year. The band is eager to get out and support these collections, just as soon as it’s safe to do so.

“I’m always ready to play riffs with my dudes, so we’ll see where it goes from here,” says Richie. “Maybe The Sword will come out of hibernation every once in a while to play some shows or tour — whatever it is, I’m here for it. Hopefully, it’ll become a thing. Virus permitting.”

Subscribe to the THE SWORD Newsletter to stay in the loop about our newest releases, sales, contests, features, playlists and a whole lot more.

Subscribe to the THE SWORD Newsletter to stay in the loop about our newest releases, sales, contests, features, playlists and a whole lot more.